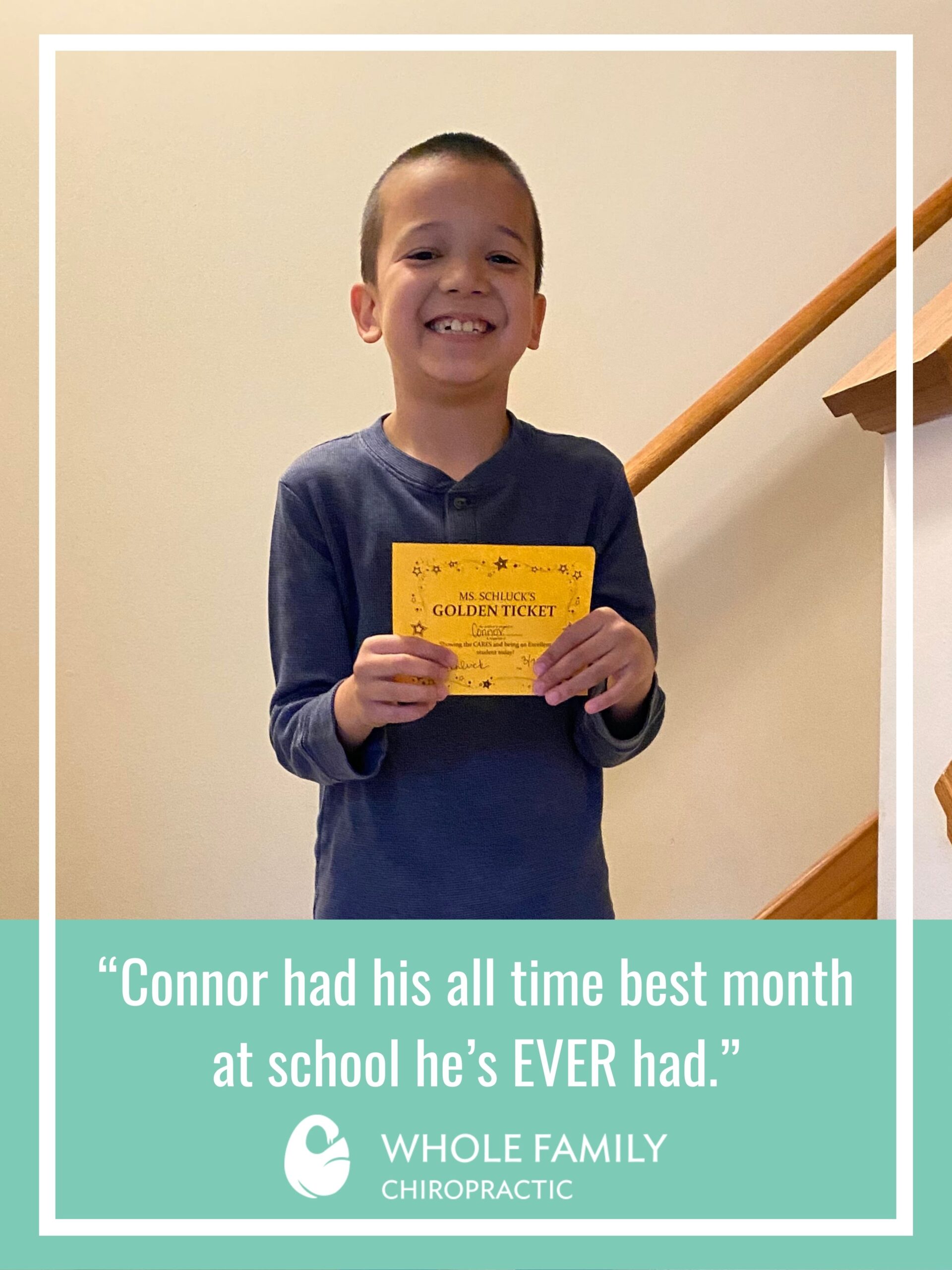 “Connor had a traumatic start in life with a lot of medical complexity.  He came two months early, we were in labor and delivery 60+ hours, and ended up having heart surgery (PDA) because he wasn’t maintaining vitals.  He was in the NICU for six weeks before he could come home.

From the moment I had Connor my entire life has been dedicated to helping him thrive and be as successful as he can be.  Connor is a “spirited child” with a strong intense personality.  He’s constantly in motion and talking, having ASD, ADHD, and Tourette’s.  I call it constant “full throttle”.  Medication has allowed Connor to calm his body down enough to sleep and eat because his body wasn’t able to do it for him.  Going anyplace with Connor had proven to be an extremely difficult challenge.

In school, we didn’t have perfect “Golden Ticket” days.  Instead, we had “Coaching Ticket” days.  With emails and calls from his special education teacher because of how difficult the week has been for Connor.

I am NOT an “alternative medicine” person. Saying I was skeptical, when we started care at WFC, is an under statement. However, having tried everything else, I figured why not try this too.

The changes we have seen as a result of Connor’s care at WFC has been unreal and felt like magic.  Initially, the changes were pretty drastic and I couldn’t even believe what was happening.  In the past, any kind of progress was extremely slow and labor intensive.  I don’t even have the words to describe it.

Understanding the changes within Connor really came together for me when Dr. Tye compared our situation to a refrigerator.  All this time we’d been endlessly working on the fixing of the fridge but there was no electricity was running through the socket to power the fridge in the first place.  The adjustments helped his body turn the power on.

It was like a switch got flipped on, especially with school.  After two months of care, Connor had his all time best month at school he EVER had in his entire life.  He also had six perfect “Golden Ticket” days in a row.  His day’s at school are pretty consistently easier now.  No more coaching tickets, emails, or phone calls.

One day Connor’s special education teacher had to come out and tell me face to face how great of a day he had that day.  How engaged and interactive he was, even volunteering to participate.  I was shocked to hear this because I hadn’t shared that we were regularly meeting with Dr. Tye.

Connor works so hard at school and for him to be able to see concrete results by getting “Golden Tickets” has not only increased his sense of self but his confidence and I’m so proud of him.  Also, getting a golden ticket is not the easiest of things to do with three long term goals and about 25 different reminders a day.  Getting even one “reminder” will leave you out of the golden ticket club that day.

Getting golden tickets has become more of the norm now.  I actually had to take the Golden Ticket clip off the fridge because he was getting so many of them the clip wasn’t holding anymore.

Since starting at WFC, Connor is over all more flexible and open to trying new and different things.  I am hopeful that he will continue to progress even more in the future.  When I saw the changes happening with Connor it felt unreal because we had done so many different things for so long with such minimal progress.

The thing I like about WFC is how at ease we feel there.  How personable, accepting, and compassionate everyone is.  I’ve really enjoyed coming to WFC, so much so that I’ve also started getting adjusted.”

~Jamie C. for her son Connor