Help your child’s ears get clear and stay clear. 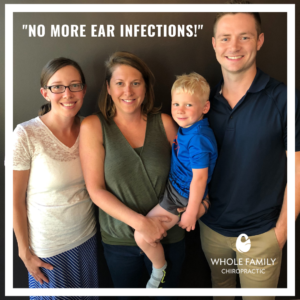 “Tucker was almost 2 years old and had been suffering from a number of ear infections & repeated illnesses. He was never really fully healthy. Every 3-4 weeks he would get sick.He seemed fine during the day, but at night he had a very tough time sleeping. There was a lot of coughing, gagging, post-nasal drip and mucus. He was also spitting up a lot. As an infant there was a lot of projectile vomiting and projectile spit up.

I was very concerned and very frustrated that he was sick. As the mother and primary care-giver to the family, I felt like it was my responsibility to figure it out. The biggest frustration was when Tucker wasn’t sleeping, I wasn’t sleeping. That was tremendously difficult. It had been 18 months of that. If I don’t get enough sleep it’s not good for anybody.

Initially we went down the conventional path. Everyone was telling me to do tubes in his ears. From the doctors to the strangers on the street. He would get this post-nasal drainage and I would take him in and he would not have an ear infection. Then he’d have a difficult time sleeping for the next three nights, and it would get progressively worse. I would take him in again after three days, and then he’d have an ear infection. So everyone would tell me he needs tubes in his ears.

As soon as we started coming to Whole Family Chiropractic, Tucker hasn’t had a single ear infection since! This has been great because of all the rounds of antibiotics and even tubes in his ears, it is now helping.

He still gets drainage when he gets sick, but it’s not like it was before. We’re still not all the way there, but we’re doing a lot to help him, and he’s obviously healthier. Now I have a lot more comfort and reassurance that we’re doing the right thing.

I would recommend someone come to WFC, because I don’t want them to repeat my same mistakes. Because if I knew then what I do now, I would have done things so differently. I feel like we’d have skipped a lot of rounds of antibiotics. Probably six to eight, which in a small infant is a lot.

I feel like WFC is extremely involved in all of our health as a family as a whole. From Tucker’s tubes, to Mac’s teeth, to Jon’s back, to my own stress. Whether it’s questions when we’re here getting adjustments or through email. We started coming here because of Tucker’s ear infections, and now it’s the whole family!”

~Jess T. for her son Tucker

Is Your Child Crying All Night With Ear Infections?

Ear infections account for about 30 million visits to the pediatrician per year, and more than 80 percent of children have at least one ear infection by the time they’re three years old.

We know how difficult it is to see your little one struggling with sleepless nights, fevers and lack of answers, when all you want is for them to be healthy and happy!

Whether it is their very first ear infection or you’re a frequent flyer to the pediatrician and ENT for antibiotics or tubes, we are here to help.

If you’ve ever wondered…

Then we’d love to connect!

Our goal is to provide awareness, answers and action steps to understand:

We are passionate to help educate & empower you to find the answers & options you’ve been looking for!

You’re not alone in this, we are here to help!

More great stories & resources in the Ear Infections section of our blog, including: