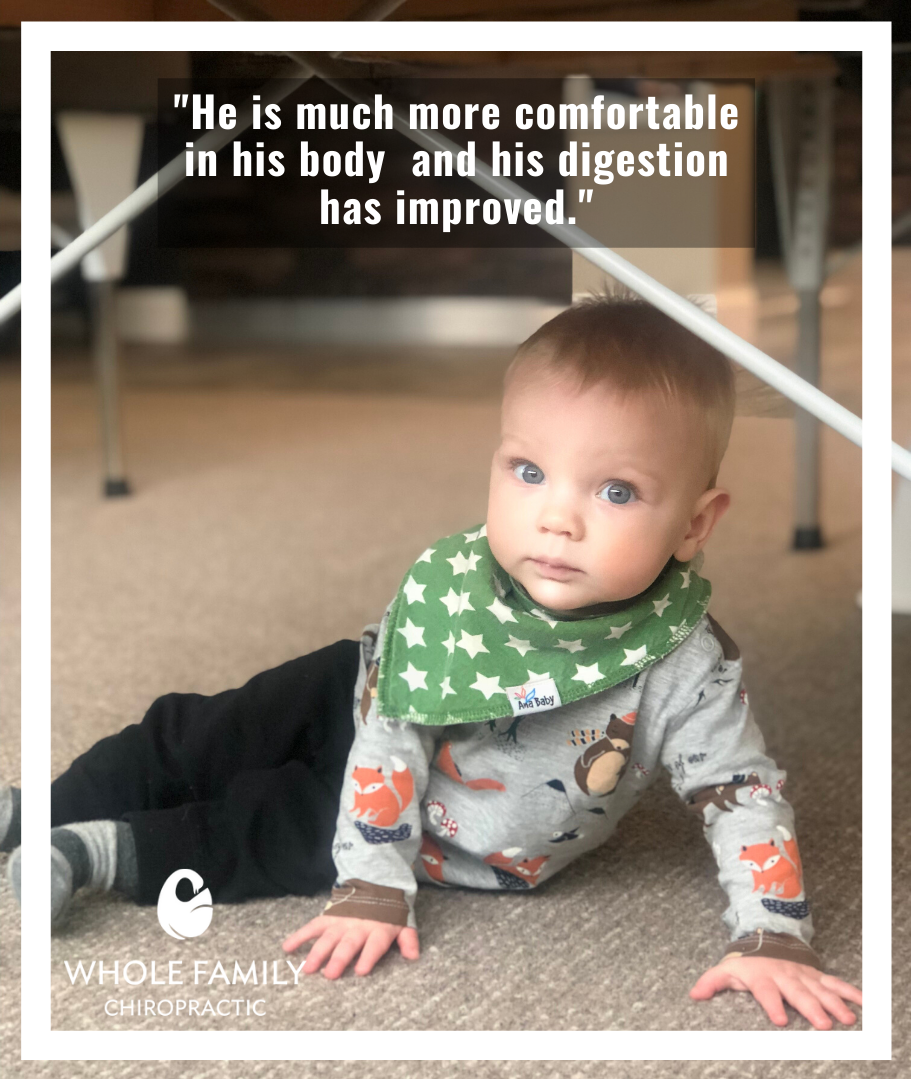 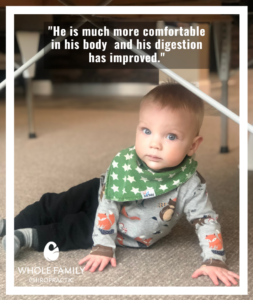 “Lochlan was just under four months old when we started coming to Whole Family Chiropractic. He had a very rough start to life. At the time of our first adjustment, he wasn’t growing like he should. He was born at the 80th percentile in weight but had dropped down to the 5th percentile. He had chronic diarrhea and green mucus stools.

I think it was because he was hospitalized from 3-4 weeks old with a UTI infection that developed into blood sepsis, which is a very serious illness that can kill. As a result, he needed IV antibiotics for 11 days. Everything after that went downhill.

Nursing became very challenging. He’d cry after every time he nursed, and it was clear he wasn’t feeling satiated afterward. His poops started to turn colors. I started getting lumps in my breast after his stay in the hospital. It was clear he wasn’t efficiently nursing as he had been before, and that his body wasn’t assimilating the milk he was getting.

He was also a stiff little baby. Dr. Tye noticed with the first appointment when he rocked him side to side he was like a pendulum – his body moved like one big stick. He always had his arms coiled toward him. He was a very fussy, colicky baby who wouldn’t play.

It was a stressful experience. Fortunately, even after his first chiropractic adjustment, I never had another lump or blockage in my milk duct! As he nursed better, it was clear to me that the stress he had gone through had affected him (I was also in labor for 64 hours! That probably stressed him out too…).

He is also much more comfortable in his body. I noticed when he started to roll and crawl that he was a lot more mobile and limber. His digestion also improved after a few months of care.

What I like about WFC is how nice the community feels here. We’ve always felt safe and listened to. At other places sometimes it feels like you’re being talked to. Here it feels more like a family, where you can trust to get good advice to support your own family. I like that you focus on children and child development, and more than just physical symptoms. It can be scary being a mom. There is so much information on the Internet, and it’s not always easy to know how to navigate that information. I like WFC’s videos, and the thoughts and topics about child development have been helpful.

I would recommend WFC to any kind of patient, but especially to people who have children with conditions they are trying to manage. To know that there’s a natural way to help is so important!”