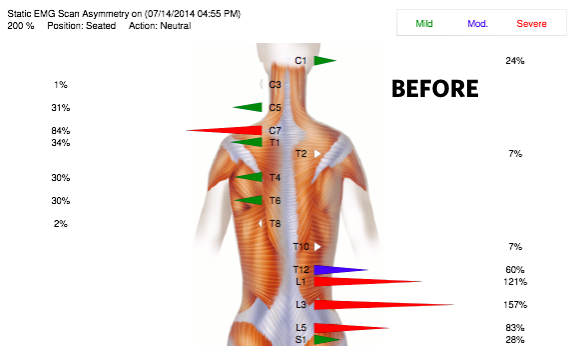 Mom brought her nearly 8-year-old daughter to our office to see if we could help with a number of issues, including repeated urinary accidents during the week. The young girl would get so caught up in what was going on around her, she wasn’t perceiving when she needed to go to the bathroom. As a result, she was repeatedly embarrassed at having to change her pants in the middle of the day.

Fast forward just a few short months: Both mom and daughter are quite happy to say that she has been accident free! Even times when her engine is running high and she has a lot going on, she’s now able to maintain control of her bladder, and to recognize when she has to go to the bathroom. Mom’s happy she doesn’t have to change her daughter’s pants, and daughter’s happy that she doesn’t have to be embarrassed!

Here’s how mom describes the problem and the transformation:

“Several times each week my daughter failed to recognize she needed to use the bathroom. No reminders or rewards seemed to alter her behavior, and she would regularly come home from school or play with wet pants. saying she just forgot to use the bathroom.

Just before she turned eight, we started going to Whole Family Chiropractic. Fast forward a few short months. As we were filling out the feedback forms for her third set of Progress Report re-scans, it dawned on me that my daughter hadn’t had an accident in a while. When I asked her about it she said confidently, ‘That hasn’t happened since I was seven!’” And she’s right—the accidents just aren’t happening!”

How did this wonderful change take place? We helped this girl’s body heal and get better via our specialized neurological chiropractic approach using Torque Release Technique.

There are two main changes that occurred in her physiology that allowed her body to work the way it is supposed to.

In this young lady’s case there was a lot of stress at the base of her spine—the area that controls the bladder—visible in the “Before” scan in the lower back area, where the red and blue lines indicate severely stressed nerves. 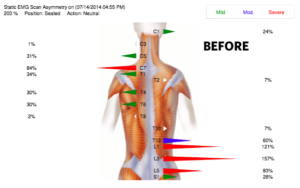 The torque release adjustments removed stress from these nerves, allowing them to assert proper control over the bladder muscle, which began to function normally. Notice the improvement in the lower part of her spine in the “After” scans—the long red and blue lines have disappeared. 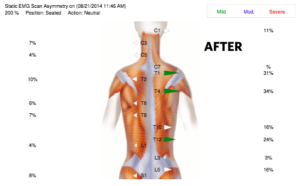 Neurologically, the bladder is controlled by a part of the nervous system called the Autonomic Nervous System (ANS). The ANS has two modes—“fight or flight” and “rest & digest.”

Through precise neurological chiropractic care, we were able to help her body activate the “rest & digest” side of the ANS, taking it out of “fight or flight” mode and calming both her brain and body.

As a result, our young practice member’s body is now able to better recognize when she has a full bladder, and to respond appropriately (hold on until a bathroom is nearby).

Does your child struggle with bladder control? Have you ever had his or her nerve system checked for abnormal stress? If not, we recommend seeing a qualified neurological chiropractor to learn whether gentle and safe chiropractic care could change your child’s future.

It could mean a lot of dry days, dry nights, and more smiles for both of you!