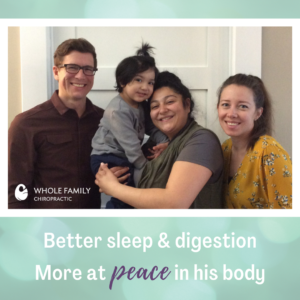 “When I was pregnant with Nathaniel I had really bad acid reflux throughout pregnancy. I couldn’t eat anything, even water would give me acid reflux. After Nathaniel was born, I noticed that he was having problems sleeping, being over excited, overly emotional, and with his acid reflux. He would spit up a lot, which can be normal, but it never seemed to go away. There were also times when he would clench his hands and shake. I wondered if what I had experienced through my pregnancy somehow affected him. I can’t imagine how he felt, I just wanted to help him the best way I could.

When I started to bring Nathaniel to Whole Family Chiropractic everything went away. It was awesome. After his adjustments, I noticed he was a lot calmer and he sleeps better through the night.

I realized things were actually working and changing for Nathaniel almost instantly. Right away I noticed he was a lot more peaceful in his own little body and not so tense.

There was a time that his body was really tense before he was adjusted. After the adjustment he looked absolutely relieved. The way he looked at Dr. Tye was like he was thanking him for helping him, but he wasn’t old enough to talk. There was a freshness in his face and his hands. It was so beautiful.

We have gone to a traditional chiropractor for my nine-year-old, and he would say ‘Oww that hurt.’ In the end, we didn’t want to go there anymore. He likes coming to Whole Family Chiropractic because they are so gentle.

As a mom, I feel a level of security. Nathaniel is thriving and the adjustments have benefited him majorly. He is so active and understands a lot for his age. If he wasn’t getting the adjustments, he’d be struggling every day.

I would recommend anyone to come to WFC because the care here is so gentle. The atmosphere of the office is so peaceful and safe. Other offices, you are just in and out. Here you come in and they know and care about you. I feel such peace and harmony at WFC and everything has started to make sense.”

~ Glenda T. for her son Nathaniel