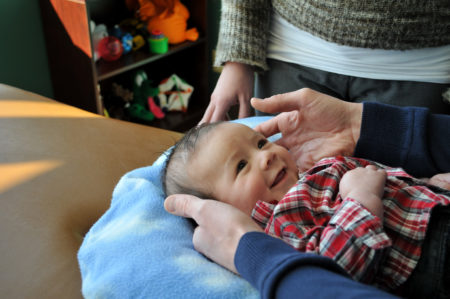 AS YOU MIGHT GUESS, when a birth is complicated and includes things like forceps, suction, or Caesarian section, or is preceded by stresses on the mother during pregnancy… 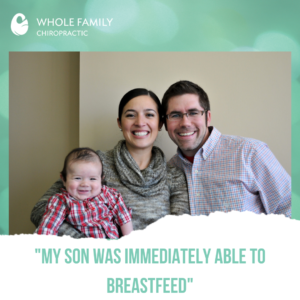 …baby is more likely to have had extra pressure in a number of ways, including physical stress on the delicate neck area that houses the essential connection between the still-developing brain and the still-developing body. This can cause some of the common problems babies have like frequent ear aches, colic, and more.

WHEN BENJAMIN T. WAS  BORN, HOWEVER, all seemed to go perfectly. It was a relaxed atmosphere and an uncomplicated birth. But there was one problem: he wouldn’t latch on and nurse.

After two days, as you can imagine, his parents, Benjamin and Krystell, were pretty worried. Krystell was a practice member at Whole Family Chiropractic, and on the advice of her midwife, she called Dr. Tye, who immediately did a home visit.

Dr. Tye gently touched baby Ben to examine him. He then applied the pressure you might use to test a tomato’s ripeness to one of the vertebra in Ben’s neck (see pictures of an actual adjustment taking place).

Almost immediately baby Ben started to gurgle, and spat up some gook that had been in his little tummy. Within minutes, Daddy Benjamin said, his son began to nurse.

Daddy Benjamin was dumbfounded. “It was crazy—one adjustment and my son began to breastfeed.”

Dad had been very skeptical about calling Dr. Tye due to a negative experience with a previous non-neurological chiropractor, but this time…

“Dr. Tye adjusted our son and literally within minutes of the adjustment, our son started breastfeeding. And he would not do it at all prior to that. It was like a button was pushed and my son was immediately able to breastfeed,” Dad said.

As you can see from the photos, Baby Ben is now well fed and has two very happy parents. Baby Ben is now Toddler Ben, and he–and both his parents–are still coming in periodically to get the neurological adjustments that cleared the way for young Ben to latch on as a newborn. Mom and Dad don’t ever want subluxation to interfere in Ben’s development again! 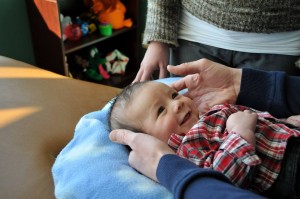