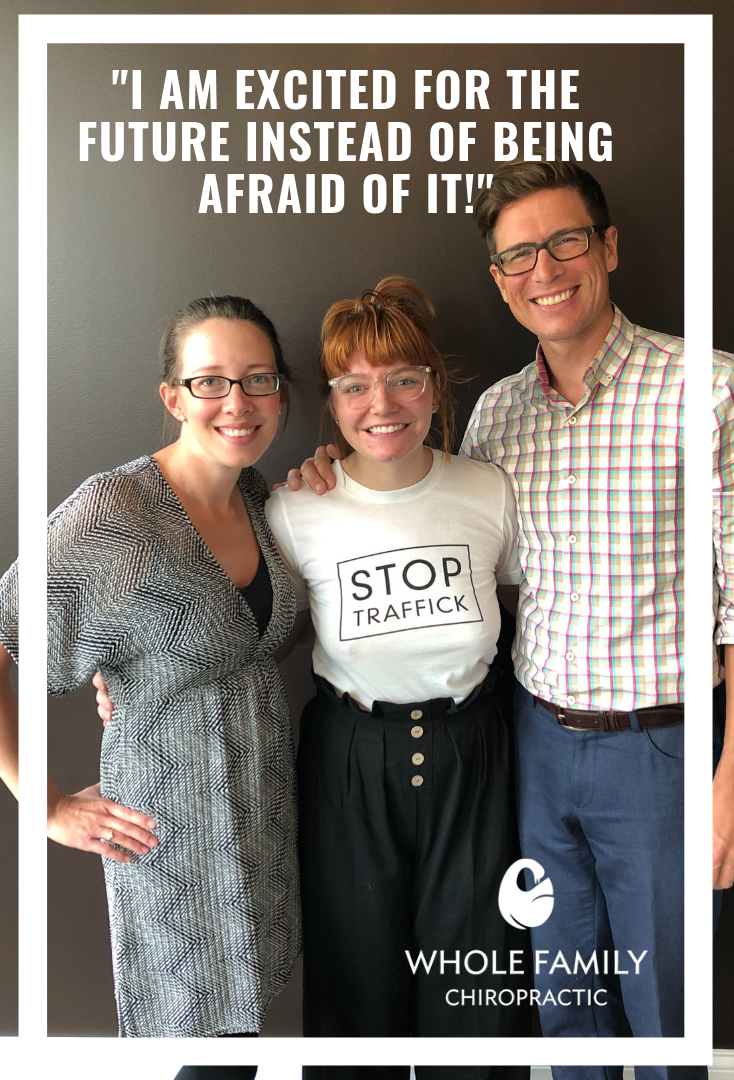 “Before receiving chiropractic care I was stuck in a rut. I was really complacent and struggled with a lot of anxiety and depression. I didn’t feel like I was going to do anything in my life. I thought the relationship I was in was going to fix everything, but I still couldn’t get myself to do anything. I would sit and wallow in my own self pity all the time…I just wanted to change.

It was hard because I had tried different medications, tried talking to people, tried to go out and exercise, but nothing was working. Nothing was helping and it felt like it was never going to get fixed. It sucked because I was just sad all the time.

Honestly, when I went to Whole Family Chiropractic I was skeptical at first. But immediately upon walking in it felt really safe. I could tell everyone cared, and they even knew my name. While I’ve been here, everyone wants to know about my progress and how I’m doing. It’s nothing like I’ve had before and is different than any other kind of treatment. But it works! I never would have imagined I feel as good as I do.

I’m in a totally different place now. I am no longer in the relationship. In a short time period I even lost my best friend, I lost my house, and am in a totally different job. In the past, if I would have thought about all these things happening together, I would have been really scared and concerned. But now, I love my job, and I love where I’m at. I am excited for the future instead of being afraid of it. It’s a really good feeling!

When I first realized things were working it was kind of scary. It was right at the breaking point of my relationship. I was going through that and thinking, ‘This sucks so bad, but I know that it’s going to be okay.’ And I had never had that kind of thinking before. In the past it was always, ‘What’s the worst that’s going to happen.’ But instead, this time I took it as things will be different and that’s okay. I told myself, ‘It will get better, and I’ll turn this into a positive thing. I can start doing what I want to do, figure out who I am, and what I like.’ It’s been awesome!

What’s special is that it’s very familial here. Everyone feels like family. It’s easy to talk to people and everyone cares and they want me to get better. Everyone remembers and checks in on things that I’ve told them. It makes me feel like people are listening and they want to know how I’m doing!

I would recommend WFC to others because at first I was skeptical. I thought things were never going to change for me because these issues ran in my family. I thought I was doomed to feel this way my whole life. Since I was so far down and it helped me, I feel it could help anyone. It helps and it works!”

1 thought on “Help for anxiety & depression – Creating a better future!”